We celebrated INESAD’s 11th Anniversary on Friday the 14th of July, coinciding with La Paz’s and France’s celebrations as well, so it was a festive day. Here is a group photo of almost all the participants (Martin Vargas, one of the founders of INESAD on a rare visit from Brazil, took the photo):

The celebrations started with a team building activity where we were asked to express our visions for INESAD in 2030 using Legos and any other materials we could find. We were divided into three teams, and here is Group 2 working on their vision:

According to Group 2’s vision, INESAD will have expanded to neighboring countries in South America, and we will be doing a lot more field work and have a couple of observatories. We will move around in fancy helicopters powered by renewable energy. They made the cutest representation of INESAD’s owl mascot.

Below is Susana explaining Group 3’s vision, according to which INESAD will have offices in Bolivia, Chile, Panama, London and Ethiopia by 2030, all with many hardworking interns. The vision included a cemetery, as the founders are expected to die and let the younger generation take over. The central office in Bolivia was represented by a well-attended workshop, several barrels of beer and a lot of owls. There was also a bridge to the Bolivian government, indicating that we will be highly demanded government advisers.

Group 1 had a more local vision, with INESAD staying in La Paz. But according to their vision, we would have tremendous impacts here, managing to clean up the Choqueyapu river and making the city green. Indeed, by 2030, the local population would project INESAD’s owl logo into the sky whenever they needed us (technically it is the owl of INESAD’s Beer and Book Club, but all of INESAD seems to have adopted it).

Since all three groups had done an amazing job at this task, no winner could be identified, and we just immediately opened and shared the prize.

The second activity was a beer tasting competition, organized by our new Ambassador Intern, Cesar (who happened to work for five years at the National Bolivian Beer Company before coming to us). We knew from earlier attempts, that it is extremely difficult to correctly identify beer brands, but, surprise, practice actually helps, and we did a lot better this time.

With an impressive 13 points out of 20 possible, Agnes won the beer tasting competition way ahead of everybody else. She has been raised by a beer loving mother, and she is the founder and primus motor of INESAD’s Beer and Book Club, so that is a highly deserved first place.

It is worth mentioning that the women of INESAD occupied the first 5 places in the ranking of the most beer knowledgeable at INESAD. We are still trying to identify what the men at INESAD are actually good at, since they are not particularly productive at work and they certainly don’t know anything about beer.

The third formal activity at the anniversary party was the recognition of the authors of the most read INESAD blogs during the first semester of 2017. The certificates went to Lykke for the most read Development Roast blog: “If we could measure poverty by gender, what would we find?” with more than 2000 views, and to Carlos Gustavo for the most read Desarrollo sobre la Mesa blog: “Riesgo país en Bolivia“, with almost 1000 views.

After the three formal activities, the party turned into generel joy and dancing:

After the party, all the young people went to Malegria for José’s Farewell Party. He is going to start his masters degree studies in Chile next week, and we are pretty sure we have prepared him well.

Previous Out of Bolivia, into Africa, April 2017
Next 2017 Dream Team Dart Tournament 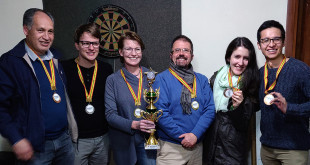 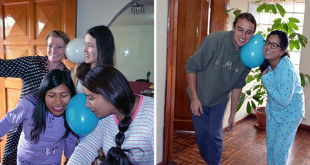 In preparation for Cesar’s farewell party at INESAD this week, we decided to organize a …